SourceOrtho is proud to be a distributor of the Mettler family of products.

Next to Disneyland, few companies have as rich a history of innovation and longevity in Anaheim as Mettler Electronics. Founded in 1957 by engineer and inventor, Hal Mettler, the firm is the world leader in portable ultrasound and electro-stimulation therapy equipment used in chiropractic, physical therapy and sports medicine. 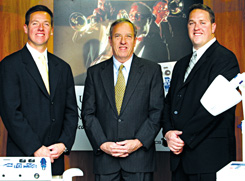 Hal Mettler introduced his company and groundbreaking Sonicator® 700 in June of 1957, with its unheard of price of $199.50. Because the new device was so affordable and portable, it revolutionized ultrasound therapy, making it readily available to a wide range of therapists and patients. With the new Sonicator, therapists could move the machine easily between treatment settings to reach any patient requiring therapy. It was an engineering breakthrough on the order of the transistor radio.

Following the success of the Sonicator, a rapid succession of Mettler product innovations followed, including Auto*Therm® Shortwave Diathermy, Cavitator® Ultrasonic Cleaners and portable Muscle Stimulators. Hal Mettler was awarded a total of fifteen patents for his ideas.

After Hal’s death, the firm maintained his commitment to innovation. Mettler Electronics engineering group continued to update and improve the products while maintaining an active new product development program. The result is a state of the art product line—with microprocessors replacing the original tube and transistor circuits—for enhanced performance and reliability.

Success breeds imitation in any industry, and the portable ultrasound business is no exception. But despite the fact that Mettler Electronics faces stiff competition from dozens of domestic and international competitors, the family firm remains the world leader in the industry it spawned. Currently Mettler Electronics sells 60% of the ultrasounds in the world. According to Stephen Mettler, the reason that customer loyalty is so high is because…”customers know that Mettler products represent quality and value. When they buy a Mettler Sonicator, or Sys*Stim®, they know they are buying a product that is ‘sure to work’ for years to come.”